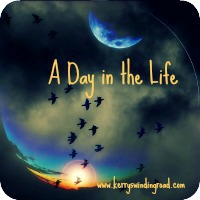 It’s actually Thursday morning right now. But I am going to write about yesterday because I went to bed with a headache before I had the chance to blog.

Wednesday mornings I get up with the monsters while Hubs sleeps in. Yesterday he got to sleep in because he was up for an hour with the kids. First Zoey was up and then the boys decided to be awake for a bit.

While the kids had their breakfast (and I had mine) I caught up on some reading. Once Hubs was up, him and I had a coffee together. Then he needed to try and fix his laptop (again) because the mouse pad stopped working. Turns out he is going to need a whole new computer. Glad it’s not even a year old, and I just spent 100$ on a new screen for it. Anyways. That’s not the point of this blog. While he was fixing his computer the kids and I looked at the toy catalogs so I could see what intrigued them. Turns out, it was trains. Surprise surprise.

When Hubs was done with his computer he made us some lunch. After lunch Nick napped, Zoey fought her nap and Alex had a rest. Then we went to the store for some more apple juice and a skipping rope.

I am going to have to go into town for a skipping rope though. They aren’t in season and I can’t get them here right now. But I am not going into town until Tuesday, so until then I have been running up and down the stairs as exercise.

When we got back from the store the kids and I played (you guessed it) trains. Then I made some supper and we got the kids bundled up to go for a walk. While we were out for a walk, I chased the kids around the field across the street for awhile. Whew! Then we came home, watched the Bubble Guppies and went through our bedtime routine.

By this point I had a nasty headache. It had been slowly creeping up on me all day. But I didn’t want to go to bed because I still had to do my diaper laundry (I guess I’ve left this out all week, but once the kids are in bed I have to do the diaper laundry as we cloth diaper our kids) Hubs assured me he would deal with it and I was in bed at 730. And I slept until 6 this morning when Alex decided to get up. I am feeling pretty good this morning. I guess we’ll see how productive today is, it’s laundry day!

Thanks again to Kerry over at A Winding Road for starting this! I am having fun with it. I strongly encourage everyone to go check out her blog! I love it!