This is my third and last installment of my birth stories. This is the story of Miss Zoey-Ann Marie.

Hubs was on board and so the trying began. We didn’t have to try very hard ha ha. Less than a month later on September 19th, 2012 we found out we were expecting our third little monster!

This pregnancy was amazingly different than the boys were. I flew through the first trimester with no morning sickness, and the second and third trimesters with minimal aches and pains.

This time around I was sure we were going to be having a girl. We chose the name Zoey-Ann Marie for a girl, after my mom who is Sherry-Ann Marie and  Zachary Ian for a boy.

On January 3rd, 2013 we found out that we were indeed going to be welcoming a little girl into our not-so-little family!

The original plan when I found out I was pregnant was to go out to MB in February and have the baby in Winnipeg with my mom. I went out to Winnipeg but there were some complications (in life, not my pregnancy) that resulted in me choosing to come back to New Brunswick on March 31st, 8 weeks before my due date, to have the baby here. One of the biggest reasons was the Dr I had in Winnipeg not taking my fears about my bladder retention issues seriously. To me it was a very big issue.

When I arrived back in New Brunswick and was assigned to an OB (I couldn’t get the same OB I had with the boys as he was booked full and I needed an OB right now.) We sat and discussed my issues and fears. Since the cause of the bladder retention issues with Nick was never discovered, we only had theories to work from. The theory was that the issue was caused by 1-The size of the babies (Alex was 7 lbs 14 oz and Nick was 8 lbs) 2- The length of time I spend pushing (4.5 and 2.5 hours respectively) 3- the use of the epidural leading to the use of catheters or some combination of the three.

The OB decided to closely monitor Zoey’s size, and induce if she seemed to be over the 7.5 lb mark. It was also decided that I would be induced on my due date at the very latest. He also decided that he didn’t want me pushing for more than an hour, and if at an hour she wasn’t almost out he was going to move me over for a c section and that we wanted to avoid having me catheterized if at all possible.

On May 20th I went into the hospital and I was given Cytotec (which is a pill inserted into the vagina) to help ripen my cervix and prepare my body for labor. I needed to lie down and be monitored for an hour after they inserted the pill and then I was sent home for 3 hours. When I went back to the hospital at 1:30pm my contractions were starting to get more frequent and regular. The nurse had me walking and sitting on a birthing ball to help me dilate more. This was the first time I had ever experienced labor without the use of pitocin and the contractions didn’t seem nearly as intense. When I was checked at 4, she didn’t tell me how far I was and I was begging for an epidural. (Even though I couldn’t have one) I was in pain, and I was waiting for the contractions to get stronger (the way they had on the pitocin)

Suddenly I had the urge to push. I was shocked at  first. I had never felt this urge before (thank you epidural!) after a couple more contractions I couldn’t resist the urge anymore and I got back up on the bed to start pushing. Less than 10 minutes later, at 4:55 PM weighing 7 lbs 3 ozs and 20 inches long, I gave birth to our amazing daughter. 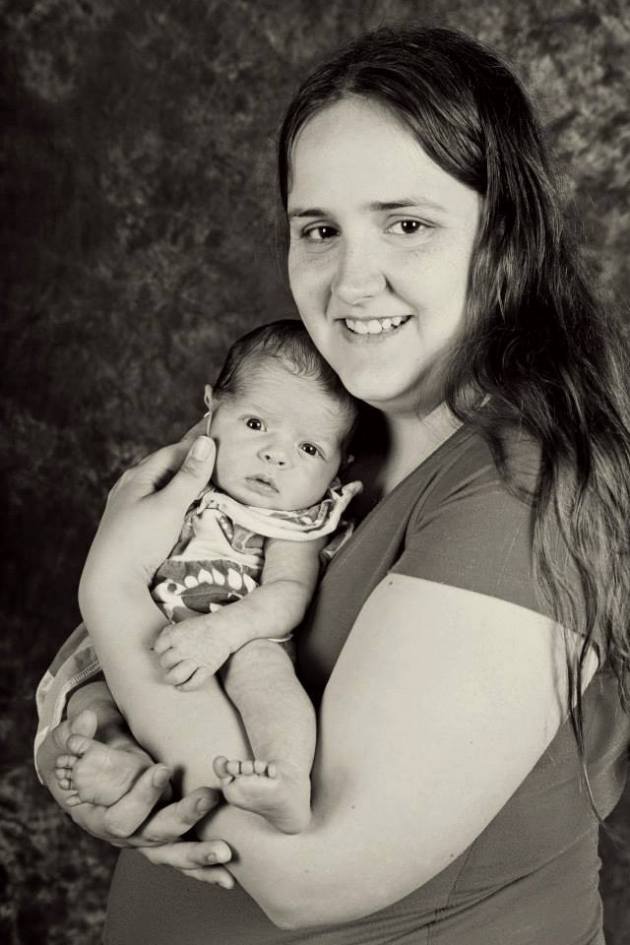 Because I was out of the hospital so fast with Zoey, I actually don’t have any pictures of me holding her in the hospital.

Ironically, my three babies have 2 very interesting similarities. All three of them were due on the same day of the month (Alex Dec 25, Nick Mar 25, and Zoey May 25) and all three of them had the same size head and tore me the exact same resulting in me needed the same number of stitches!

I was released from the hospital 24 hours after I gave birth, (on my birthday!) and came home to join my wonderful family.

Since having Zoey, life has been an adventure. Thankfully, I have had no bladder retention issues (although I do occasionally lose feeling in my bladder and am currently waiting on an appointment to see my Dr about it) and the Postpartum depression and anxiety that were so prominent with Nick, are very mild. I have bad days/bad weeks but overall, it has been a lot better, which leaves me with some guilt, but that’s another post for another day!

6 thoughts on “All About Zoey”